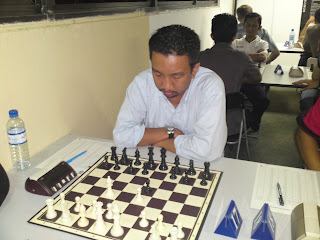 The 2nd DATCC or Dato Tan Chess Center tournament just ended last Sunday.I was in Kuala Lumpur but I don't have time to go there since my son playing at Jalan Cochrane.Abdul Aziz Abdul Shukur was the winner.Kuala Lumpur base Terengganu player Nur Ilhamuddin finished in 6th placing with 5.5 points.

From 9 games he loses to Sahir Sarifdin ,Abdul Aziz Abdul Shukur and Soon Wai Cheong and drew with Nik Farouqi.I hope to published some of his game later.

Ilhamuddin as we all call him is the highest rated player among Terengganu players and very active playing in Kuala Lumpur.After graduate from Universiti Utara Malaysia he secured job at Eon Bank where he is now.

During my conversation with him on Saturday, he said that he prepare his opening thoroughly for this event and among Ilham victims are Abdullah Che Hassan a very experienced player.From my points of view about Ilham is that he only play opening that he understand and after making throughly study it,of course with help of Rybka.

He has won few tournament but never big event like Selangor Open or Malaysia Closed and I hope someday he will prove it to other Terengganu players.
Posted by Muhammad Arshad at Wednesday, February 03, 2010