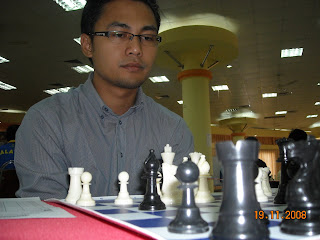 Mas Hafizul Hilmi
Malaysia top player Mas Hafizulhilmi Agus Abdul Rahman give commanding performance in qualifying round of world championship in Vietnam last week.He finished 6 points from 9 round game format to produce his best ever result in his quest for norm and ultimately the Grandmaster title.Mas misses GM norm merely by half a point.I think Mas has learnt a lot from this event and hopefully he will improve his games in future tournament.

They are 54 players took part in zonal whereby most of the players are from Vietnam.Majority of them are under twenty and they even field up 3 under 12 players (Le Quan Long ,Nguyen Van Thuan Thanh and Le Huu Thai).Can our junior match thiers? But here in Terengganu they a teachers and parents insist their children played only in age group although they already state junior representative.

Its not that easy as we speak ,Mas really need a dedicated team behind to support him.Look at Indonesia team they always travel with coach and team manager when they played in overseas tournament.At least our player feel comfortable and can concentrate fully on their game.But the bottom line is ringgit and cents.