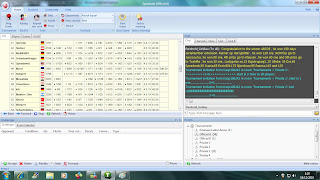 ﻿
﻿My lucky win at playchess.com last night.Awaiting for Ilham to join me here.
﻿

Beside the 3rd National Junior Chess Championship in Kuala Lumpur they are two other FIDE rated event currently being held, at the University Malaya The Grand Asian Chess Championship (GACC)  and the Sarawak open.Information about these events are available at chess-results.com.Terengganu players who are playing at the GACC tournament are Mohd Shazwan Zulkifli,Wan Ahmad Farid Wan Abdul Rahman and Wan Aizuddin Wan Razali.Wish all of them good luck.There are no known Terengganu players playing in Sarawak

Posted by Muhammad Arshad at Saturday, December 18, 2010 No comments:

The 3rd National Junior Chess Championship is in progress at Hotel Olympia in Kuala Lumpur.The annual event start on 15th Disember and will end on 19th Disember 2010.There are 69 players in the boys category First seeded in this section is Yeoh Lee Tian who has FIDE rating of 2122 and there only 32 girls taking part in this section.Women Fide Master (WFM) Alia Azwa Anin Bakri is seeded first with rating of 1953.

Last night after 2 hour of play and 9 round of 5 minutes blitz and 200 players I finished with 5 points just enough for me to win 30 days more membership extension at  playchess.com.You want to know my secret...
Posted by Muhammad Arshad at Tuesday, December 14, 2010 No comments:

Now that the event is over and the winner is IM Oliver Dimakilling.Table below is for  rating statistic.Notice that some of my friends who are playing here going to drop rating.My congratulation to Dungun's Siti Aisyah and Siti Khadijah for doing well in the challenger section

I think it's was one of my  worth of  investment last year when I decided to buy Fritz 12.Though it was about €50 I gained premium membership at playchess.com which I made full used.I gained full access to live broadcast ,playing in the blitz tournament and also playing simul with IMs or GMs
.My lucky (tikam toto) wins on many occasion here made me very satisfied with the decision to buy the original sofware.For instance you can follow live game of London Chess Classic here and here but it's was not the same because it's dull and you cannot add engine to analyse the ongoing game.God willing one fine day I  will organised one FIDE rated event and broadcast live at playchess.com.Buy the original if you an addicted to chess.Buy it from me.
Posted by Muhammad Arshad at Sunday, December 12, 2010 No comments:

At second London Chess Classic the biggest chess event held by the English in recent years saw Anand celebrated his 41st birthday by beating Nigel Short 45 years old former chess child prodigy in crushing style.Short start his game with e4 pawn and Anand respond with c5 and the game turn into Sicilian Closed Opening.
On move 11th Short played Qh4 to initiate typical Kingside attack as per theory suggest,Anand respond with Ne8 in order  to exchange the attacking Queen.Short declined and played Qh3.Anand seized the initiative when he played Nd4 with threatening Nc2 fork.Anand has the cruise control for the entire game and he checkmated his frustrated opponent on 43rd move.
Niger Short who spend long hours at playchess.com server used to play similar kind of position in his 3 minutes games and of course it's different scenario.Calsen also won his game against Hikaru Nakamara .Both players played the standard opening  theory and a lot of tactic during the middle game
On move 24 Hikaru forced Calsen to exchange Bishop for a Knight , the turning point of this  exciting game.Hikaru plan was to have double bishop on open board.Calsen turned the table around when he managed to exchange Black's Bishop.Hikaru tried to gain the initiatived but Calsen already prepared and later  have big advantages.
Read more here
Short and Anand game
Calsen and Hikaru game
Posted by Muhammad Arshad at Sunday, December 12, 2010 No comments:

Penang Open final round will start today at 9.00 am.Philippine International master ( IM )Oliver Dimankilling almost certain to win the championship as he needs only draw from his compatriot to secure the title.He has now accumulated 7 points from 8 game.
It's was a smooth passage to him as he beat Grandmaster (GM) Niaz Murshed from Bangladesh at round four and our very own IM Mas Hafizul Helmi at round five.Trailing at the second place is Plilippine Oliver Barbosa who 6.5 points, Barbosa will play with Kuala Lumpur base Ian Udani in the last round.
IM Mas who has 5.5 points will play with Reggie Olay Edgar to determine his place among top ten winner.Second best Malaysian is 2010 Malaysian Champion Tan Khai Boon who has 5.5 points.
In the challenger section who has 109 players including Dungun's sisters Siti Aisyah and Siti Khadijah Sabirin.Leading is Tin Jun Hao and Muhd Zikri Mat Zaki both has identical score of 7 points.Thirteen years old Siti Aisyah so far scored respectable five points and her younger sister has Siti Khadijah has 4 points.
Click here for current open section standing
Click here for challenger section standing
Click here for Penang Open tournament info and prizes
Posted by Muhammad Arshad at Sunday, December 12, 2010 No comments: