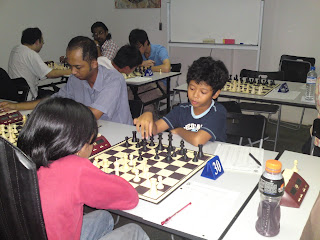 
Generally I think our juniors can make it at this stage as Amier and Nabila proved during this championship.I think what they need is the consistance exposure as their peers.Look at Iran who are now able to win world age group championship consistancely and that we need, and up to the MCF to chart the next course.
Posted by Muhammad Arshad at Monday, November 23, 2009 No comments:

I think it's a rare opportunity to watch live game specially involving Malaysia player at world stage.At the world youth championship the organiser provided live games for top board only at official website.Chess enthusiasts everwhere glued to their computer including me.But I have better option I watched live through playchess.com which provided better coverage,I can add analysis engine to game that being play or watching several board simultaneously.This previlages given to all chessbase products buyer like fritz 12.
Posted by Muhammad Arshad at Sunday, November 22, 2009 No comments: